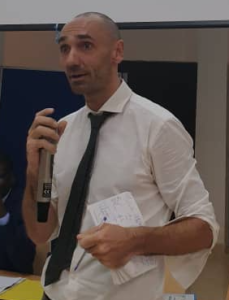 Baptiste Martin became the Director of our Executive Short Course “Protection of civilians, from humanitarian to peace operations” in early 2021. We had the opportunity to talk to him about his experience in this field.

You joined our Centre a few months ago; could you tell us something about your Protection Course?

In 2021, the Centre has offered me to coordinate this new course. We agreed it would both seek to unveil protection action in the field and provide a historical and political overview of the protection of civilians agenda.

The course comprises 50 hours of personal work and activities in class. Participants discover and reflect on some of the normative frameworks, definitions, concepts, principles and professional standards relevant to each type of protection actor. They also identify the respective, common or distinct roles and responsibilities of these actors involved in protecting civilians through political action, mediation or advocacy, security, development, human rights or humanitarian responses.

Students exercise all phases of a comprehensive protection response during the course, from developing protection risk assessments to the planning, implementation and evaluation of protection activities. We provide them with the opportunity to build their analysis, decision making, and coordination/cooperation skills through case studies, risk assessment and role play based on real-life conflict situations.

What were your first experiences in protection programming in the field?

Following studies in management and political science, I chose to contribute to human rights and humanitarian action in the Middle East. I first volunteered with national NGOs in the Occupied Palestinian Territories (OPT) at the onset of the 2002 “intifada “and explored non-violent means to alleviate the impact of a conflict on civilians.

In 2003, I joined the Baghdad office of Première Urgence Internationale. I provided protection and humanitarian assistance for Iraqi internally displaced persons (IDP) and Palestinian refugees, just as Saddam Hussein’s regime was toppled. In partnership with other NGOs and UN agencies, I conducted IDP and refugee protection assessments across the country, ensured IDP camp management, and implemented humanitarian and protection responses in high-intensity conflict zones. I learned a lot on the job, primarily through interactions with humanitarian colleagues or at-risk communities.

Gradually, my interest shifted from humanitarian assistance and camp management activities to protection coordination, capacity-building, policy-making and advocacy. With the NGO coordination committee in Iraq, I engaged with local or national authorities and represented humanitarian agencies at meetings with international coalition/occupation forces. Faced with military occupation, counter-insurgency operations or attacks by non-state armed groups, International Humanitarian Law (IHL), the Guiding Principles on Internal Displacement, and Refugee law were my bread and butter, alongside humanitarian principles. Guided by legal and programmatic colleagues, I learned to leverage normative standards and communication and coordination channels to safeguard humanitarian space or access and enhance civilian protection.

In 2004-2005, with Intersos, the UNHCR (the UN Refugee Agency), I was seconded to the Iraqi Ministry of Displacement and Migration, and contributed to the launch of the national IDP strategy, the land dispute settlement architecture, and took part in negotiations on the return of Iranian or Turkish refugees to their countries of origin.

Why did you then choose to join UN peace operations?

Following the 2005 elections, I decided to leave Iraq and settle in Khartoum, Soudan, to conduct research on the peace process as a fellow with the Cedej, the French research centre based in Egypt and Sudan. Back then, the Comprehensive Peace Agreement (CPA) between the Government and the Sudan People’s Liberation Mouvement (SPLM) had just been signed. In 2006, the UN Mission in Sudan (UNMIS) offered me to coordinate the return and reintegration of IDPs and refugees in South Sudan. Until 2009, I worked in field “team sites” deployed in Unity, Northern Bahr Al-Ghazal and the Jonglei States. Also, I held responsibilities as a “team site leader” and, as such, had to deal, in support of national authorities, with all kinds of political, security, humanitarian or protection crises challenging the peace process.

In 2009-2010, I contributed to launching the first “stabilisation” strategy in southern Sudan, designed as a joint attempt by the Government of South Sudan (GoSS) and the UN to protect civilians from ongoing violence and address the root causes of the conflict. South Sudan was then affected by sporadic clashes between the Sudan Armed Forces (SAF) and the Sudan People’s Liberation Army (SPLA). Some areas were also marred with intercommunal economic, ethnic or religious conflicts, resulting in civilian massacres and displacement. These dynamics were aggravated by the presence of militias and rogue military units operating out of the full control of the SPLA. To restore peace and security for all, we leveraged resources from the UN or the GoSS, the churches, influential community leaders or trade unions.

From 2011 onwards, I focused entirely on the Protection of Civilians (PoC) in UN peacekeeping. I held responsibilities as Protection adviser within the Mission in the Democratic Republic of the Congo (MONUSCO), PoC team leader for the Department of Peace Operations (DPO) in New York and Principal PoC adviser to the Mission in the Central African Republic (MINUSCA). In 2013 I led the development of the first Policy for the protection of civilians in UN Peacekeeping. I also contributed to or led the development of various training materials for UN military, police and civilian peacekeepers on protection issues (the PoC handbook for UN peace operations, child protection modules for the UN military, etc.).

In the past five years, I have focused my attention on compliance with international law by regional and national security or defence forces in Africa.

In 2017, for instance, with the UN Office for the Coordination of Humanitarian Affairs (UNOCHA) and in coordination with the humanitarian Protection Cluster, I supported the development of the first protection strategy of the Multi-National Joint Taskforce (MNJTF) for the Lake Chad Basin. The MNJTF is a military force mandated to fight the Boko Haram group in Cameroon, Chad, Niger and Nigeria. It conducts regular military operations in a region where civilians are regular victims of the conflict. Most of them live in IDP or refugee settlements or remote villages around the lake and face an increasing level of vulnerability, including due to shrinking economic resources – as the lake itself is affected by climate change.

In 2018-2020, I led the G5 Sahel project of the Office of the High Commissioner for Human Rights (OHCHR) and supported the establishment of an IHL-IHRL-Refugee law “compliance framework” for the G5 Sahel Joint Force. Together with a team of military, police, humanitarian and human rights professionals based across the five countries, we ensured monitoring and investigation of violations by troops and supported the development of some of the G5 Sahel Force / Army Command’s doctrines, procedures or training modules.

Since 2020, I have mainly worked with the European Union to promote good governance and human rights compliance by park rangers and other nature conservation staff in central Africa. To this aim, I work with other donors, regional and national conservation authorities, and NGOs operating in countries such as CAR, Chad, the DRC, Gabon or the Republic of Congo.

How do you see the future of the protection of civilians?

Since the beginning of the 20th century, and with the evolving nature of warfare, civilians have progressively become the main victims of armed conflict and violations of international law. The effects of climate change on populations result in increased levels of vulnerability and conflict, particularly for those whose lives depend on natural resources, such as cattle-herders, farmers or fishers.

Overall, the legal or normative frameworks to protect civilians have much improved over the last 50 years. Nonetheless, the ability to ensure compliance with these frameworks by national authorities, international organisations or international peace and security forces is still weak.

I will provide here two examples of key unfolding trends. You can find more details on protection and related trends in my “expert note” on the Humanitarian Encyclopedia, an amazing online project of the Centre.

Examples: (1) mandates and doctrinal developments for peace operations and (2) coordination and guidance for humanitarian protection actors.

Example 1: numerous peace and security operations have a duty to protect civilians under threat of violence, including from harm they may cause through their presence or operations. Many, however, still strive at fulfilling expectations in that regard. During the course, we will unveil the main challenges, lessons learned and ongoing actions to improve PoC mandate implementation in the field. For instance, faced with operational contexts with an increasing number of civilians at risk of violence, international and national security actors such as the UN, NATO, the AU, or the EU are paying progressive attention to human rights compliance and the protection of civilians concept.

Example 2: originating with ICRC and the laws of war, humanitarian protection now encompasses a wide array of humanitarian actors and activities, which have significantly multiplied in the last 20 years.

Humanitarian protection coordination has dramatically improved, not least with the arrival of the humanitarian Protection Cluster and its Child Protection, Gender-based violence, Mine action or Housing, land and property-rights sub-clusters. In these fora, NGOs and civil society organisations coordinate with UN agencies and other international organisations or government actors, some of which have formal protection mandates/populations of specific concern. We’ve witnessed essential improvements in the joint development of specialised guidance, professional standards or training material on technical protection issues (including in areas such as protection coordination, camp or community management, but also campaigning and advocacy, protection mainstreaming, human rights monitoring and investigations, protection information management, individual case management, mediation or legal assistance).

Nonetheless, while international organisations and NGOs have much improved on protection work internally, reaching efficient coordination amongst an increasing number of specialised humanitarian protection actors, and ensuring the centrality of protection in humanitarian action, has proven challenging at times. For instance, efforts are still required to improve the efficiency of protection mainstreaming and capacity building/compliance work with key international, regional or national actors, including national authorities, defence and security forces, armed groups, or civil society organisations.

Overall, humanitarian protection actors have been instrumental in advancing the protection agenda and IHL/IHRL/Refugee law compliance of national or international peace and security forces; they should now pursue their efforts to close the protection gap affecting national or regional levels actors and institutions.

The next edition of the course “Protection of civilans, from humanitarian to peace operations“, will take place online from 19 to 30 September 2022.

This website uses cookies to improve your experience while you navigate through the website. Out of these, the cookies that are categorized as necessary are stored on your browser as they are essential for the working of basic functionalities of the website. We also use third-party cookies that help us analyze and understand how you use this website. These cookies will be stored in your browser only with your consent. You also have the option to opt-out of these cookies. But opting out of some of these cookies may affect your browsing experience.
Necessary Always Enabled
Necessary cookies are absolutely essential for the website to function properly. These cookies ensure basic functionalities and security features of the website, anonymously.
Functional
Functional cookies help to perform certain functionalities like sharing the content of the website on social media platforms, collect feedbacks, and other third-party features.
Performance
Performance cookies are used to understand and analyze the key performance indexes of the website which helps in delivering a better user experience for the visitors.
Analytics
Analytical cookies are used to understand how visitors interact with the website. These cookies help provide information on metrics the number of visitors, bounce rate, traffic source, etc.
Advertisement
Advertisement cookies are used to provide visitors with relevant ads and marketing campaigns. These cookies track visitors across websites and collect information to provide customized ads.
Others
Other uncategorized cookies are those that are being analyzed and have not been classified into a category as yet.
SAVE & ACCEPT